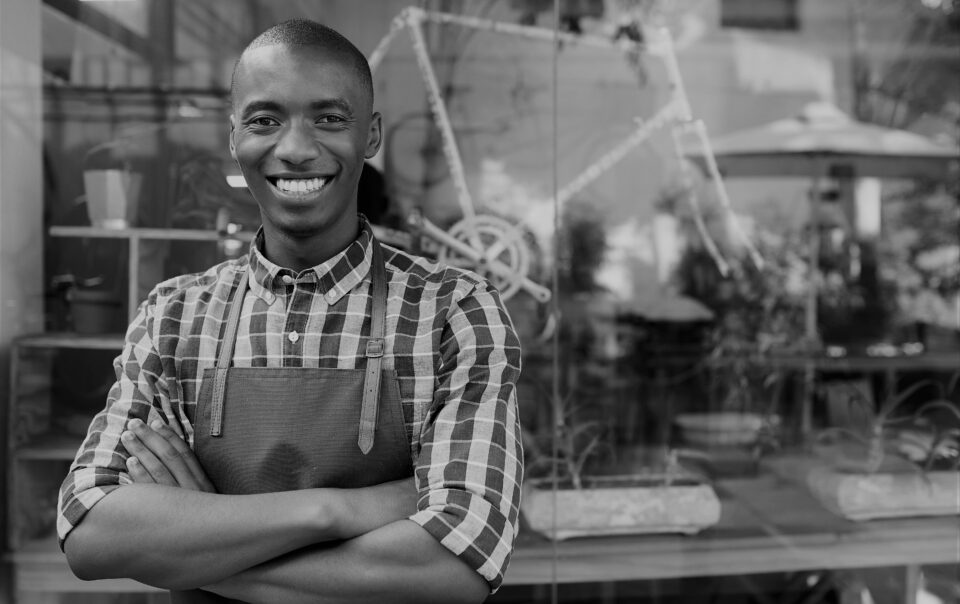 In 2019, South Africa’s unemployment reached 30%. Over 6 million people are deprived of the opportunity to contribute to the economy and ensure their household’s financial security. This does not even consider the reported 3 million discouraged work-seekers.

Back in 2012, South Africa’s National Development Plan (NDP) boldly identified 1 million job creation opportunity by 2030 in agriculture. Where are we today? And how can we grow employment?

In 2019, agriculture represents less than 2.5% of the GDP. However, it contributes more than 5% of the employment. This means the sector uses two units of labour per unit of value-added, versus an estimated 0.3 and 0.94 for the mining and manufacturing sectors. And this does not even consider the sector’s impact on the greater economy as it sources inputs and supplies material for the manufacturing industry. 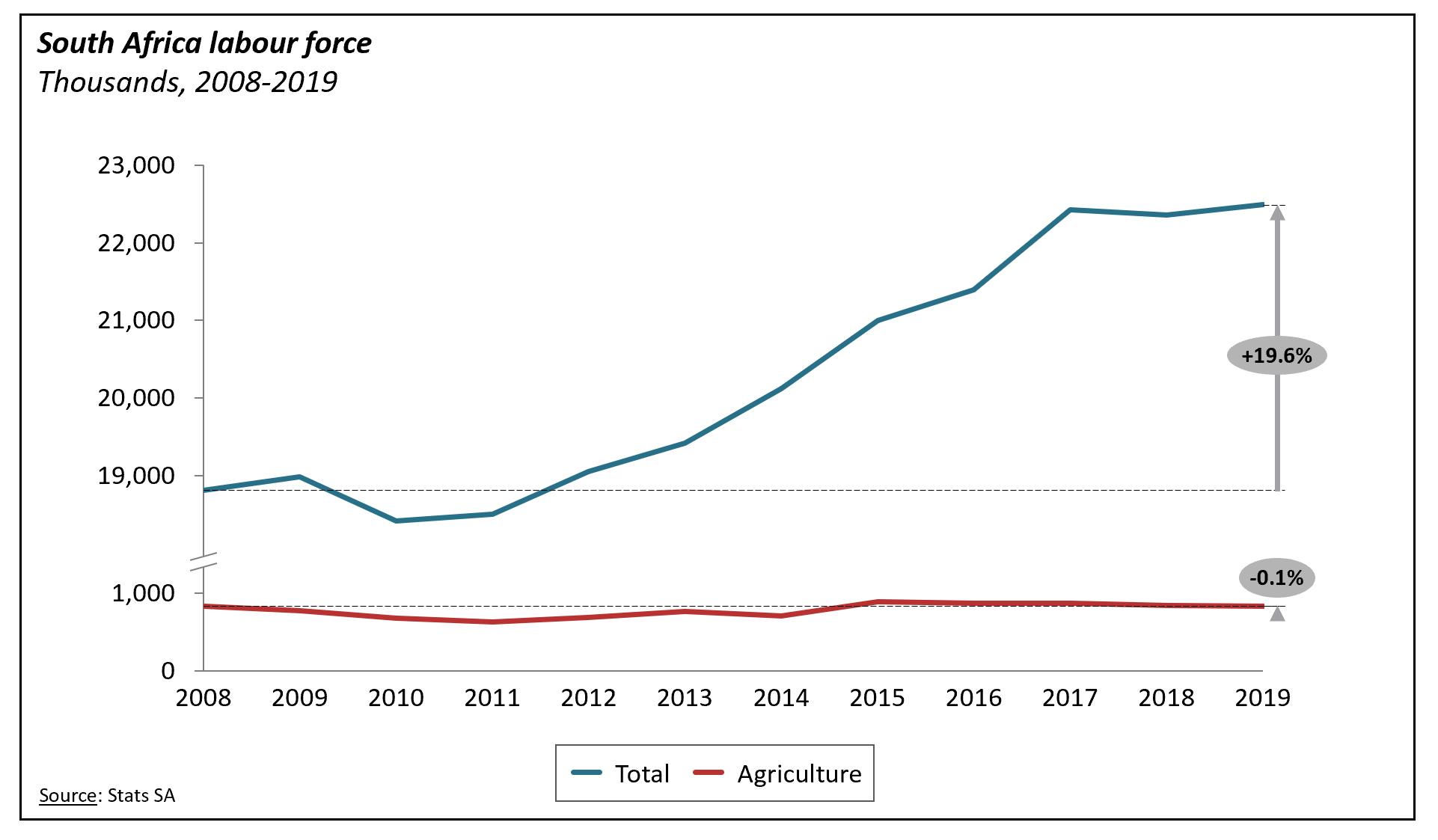 However, looking back in time, agriculture has not created any additional employment despite its ebbs and flows. About 840,000 people were assumed to be working in the sector in early 2019. Almost the same number of jobs as early 2008, despite the labour force’s 20% growth over the same period.

Beyond the '1 million' announcement: where does this job creation potential lie?

We believe creating 1 million jobs by 2030 is a stretch. But we recognise a strong potential, in agriculture and its linkages with the input and manufacturing sectors.

For agriculture to absorb more labour, land productivity ought to increase faster than labour productivity. This requires expanding production onto unused land, increasing yield by better use of inputs and irrigation, for example, and planting labour-absorptive crops.

In 2011, the Bureau for Food and Agricultural Policy estimated an additional 1.6 to 1.8 million hectares could be used for farming, on top of the 13 to 14 million in use today. In addition to this expansion, increasing agricultural productivity could be another driver of job creation. Particularly with small-scale and emerging farmers, by shifting to high-value crops, upskilling their capabilities and providing them with better access to inputs. Horticulture, such as citrus, grapes and raisins, is particularly interesting considering its labour-intensiveness, higher margins, and strong potential for exports.

Harnessing the potential: involving the private sector and investing in Emerging Agri-Entrepreneurs

Capturing this potential hinges on the government’s ability to implement a series of critical reforms effectively and restore credibility and trust with investors and the private sector. But ultimately it will be upon the resourceful South African (rural) entrepreneurs and businesses to capitalise on the opportunity.

First, land expansion, targeted by recent land reform plans, would require investment in soil preparation and infrastructure. This reform should also ensure strong property rights to enable farmers to collateralise them for fundraising. And long-term support should be provided to the beneficiaries of land reform to ensure their business sustainability and productive use of the land.

Secondly, the government has limited capacity and capability to create sustainable businesses. At BeyondSoil, we believe in the potential of the so-called Emerging Agri-Entrepreneurs, no-longer subsistence-oriented but not commercially competitive yet. With patient investment and capability-building support, they could transition to the commercial sector and develop successful farming or processing operations. This requires creating the enabling conditions for the private sector to invest in this group and transfer skills, for example, through private joint-venture mechanisms.

Thirdly, South Africa’s agro-processing outputs should be boosted. Investment should be encouraged in new projects, preferably driven by Emerging Agri-Entrepreneurs with the support of established agribusinesses. Rural infrastructure investment should be directed to connect these processors with export hubs (e.g. ports). Finally, South Africa’s brand should be strengthened, and new market access should be created with the support of the government, for example, via trade deals.

The road ahead is mapped. The time is now for action and not just rhetoric. It is encouraging to hear the government’s willingness to drive job creation in this sector, but the implementation of its policies should be prioritised above all.

This website uses cookies to improve your experience while you navigate through the website. Out of these, the cookies that are categorized as necessary are stored on your browser as they are essential for the working of basic functionalities of the website. We also use third-party cookies that help us analyze and understand how you use this website. These cookies will be stored in your browser only with your consent. You also have the option to opt-out of these cookies. But opting out of some of these cookies may affect your browsing experience.
Necessary Always Enabled
Necessary cookies are absolutely essential for the website to function properly. These cookies ensure basic functionalities and security features of the website, anonymously.
Functional
Functional cookies help to perform certain functionalities like sharing the content of the website on social media platforms, collect feedbacks, and other third-party features.
Performance
Performance cookies are used to understand and analyze the key performance indexes of the website which helps in delivering a better user experience for the visitors.
Analytics
Analytical cookies are used to understand how visitors interact with the website. These cookies help provide information on metrics the number of visitors, bounce rate, traffic source, etc.
Advertisement
Advertisement cookies are used to provide visitors with relevant ads and marketing campaigns. These cookies track visitors across websites and collect information to provide customized ads.
Others
Other uncategorized cookies are those that are being analyzed and have not been classified into a category as yet.
SAVE & ACCEPT